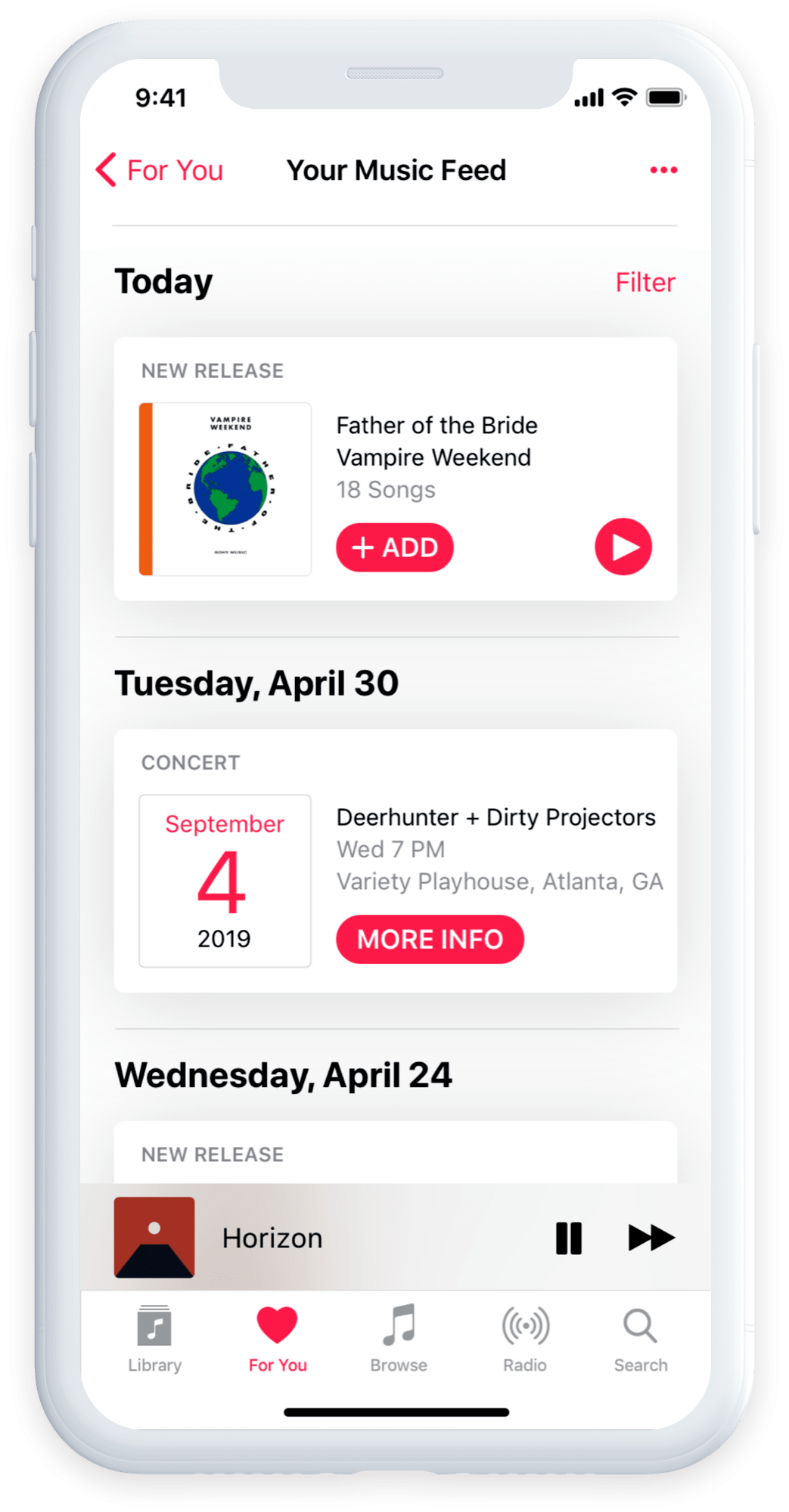 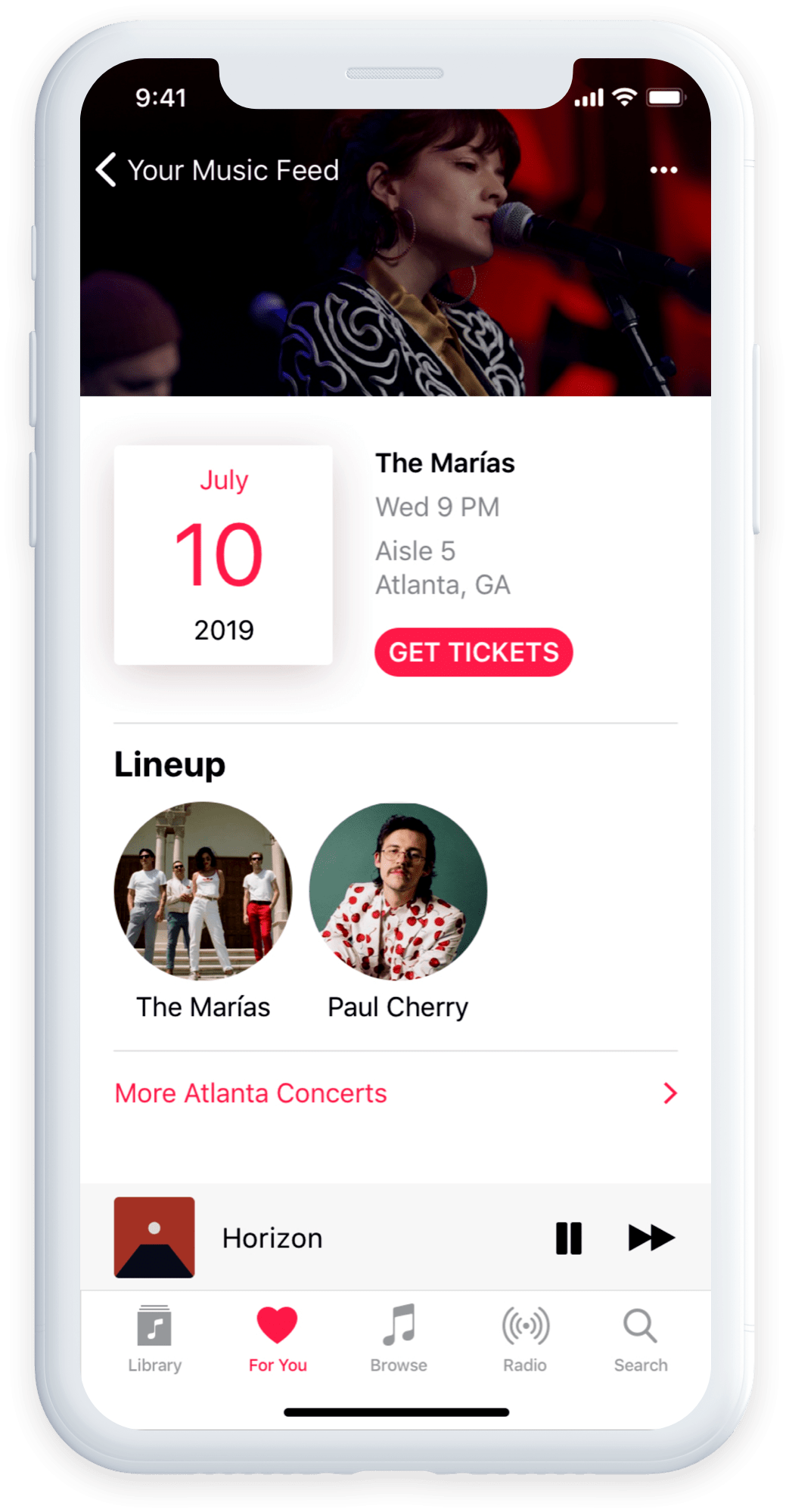 This is a project I completed for Designlab’s UX Academy. This is not a real feature for Apple Music but the research is organic and the design is based on real user voices, in combination with mentor and fellow student feedback ✌️

With over 28 million active users, Apple Music is one of the leading music streaming platforms. In order to keep up its pace with the competition, Apple wants to add a new feature to the platform to improve the user experience and drive new user engagement.

My goal is to uncover what users want most out of their music streaming platforms and how they feel about listening to and discovering music today in general. I'll use that insight to design and implement a new feature for the Apple Music app that addresses user needs and pain points.

Your Music Feed, a new feature that keeps users updated on their favorite artists, displaying all new releases and upcoming concerts for artists the user is following and pushing notifications so they never miss out on a new release or concert again.

I began by conducting secondary research: looking into various music streaming platforms, reading articles relevant to the industry, and comparing features between the leading platforms. Many of these platforms have overlapping features but none of them do it all. I also created provisional personas to represent typical users based on my findings.

The challenge now is to figure out what new feature would benefit Apple Music the most.

Skip to the Define Phase 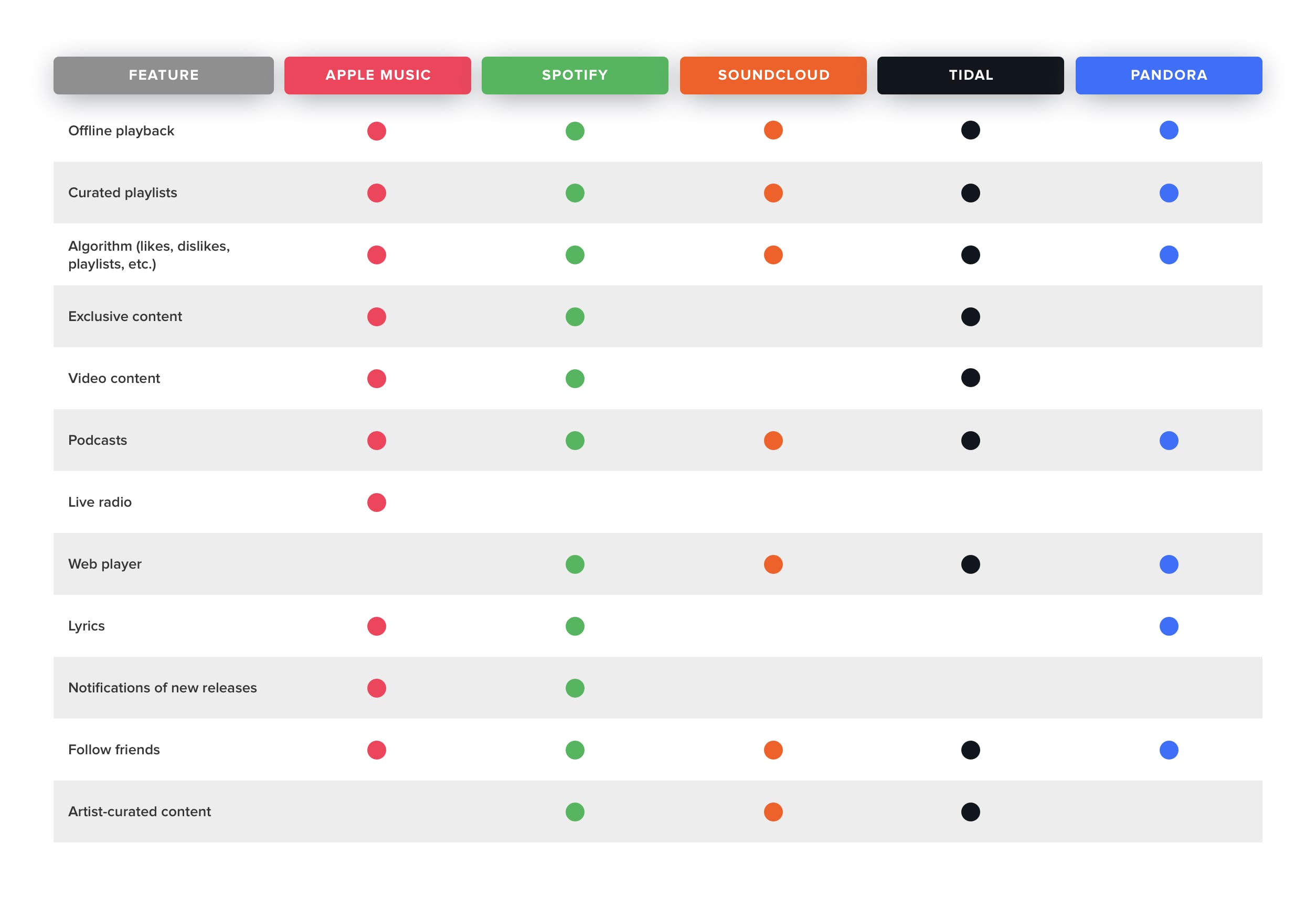 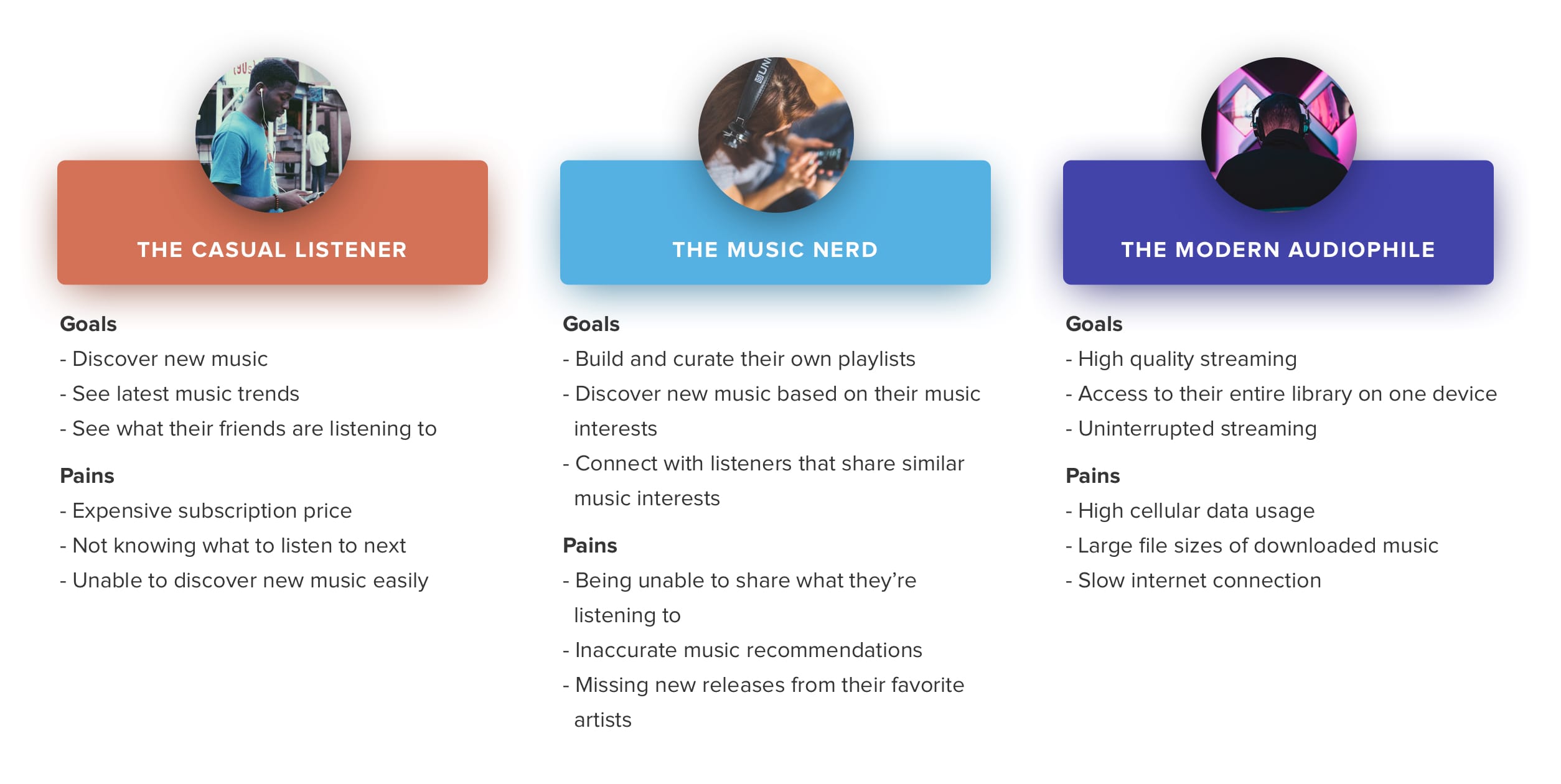 After distributing user surveys, conducting user interviews, and discovering common user goals and pain points, I determined a useful feature to add would be a “feed” section showing all of the new releases and tour dates of the user’s favorite artists in one easy to access location, with the option of sending push notifications when an artist releases new music or announces a concert near the user’s location. My user research backs this up:

Taking what I’ve learned from my research, and with this new feature in mind, I created a user persona that represents everything I heard from actual users in my interviews and from my survey responses. Referring back to this persona during the design process keeps me aligned with user goals and helps me avoid or solve the problems users have.

Skip to the Design Phase 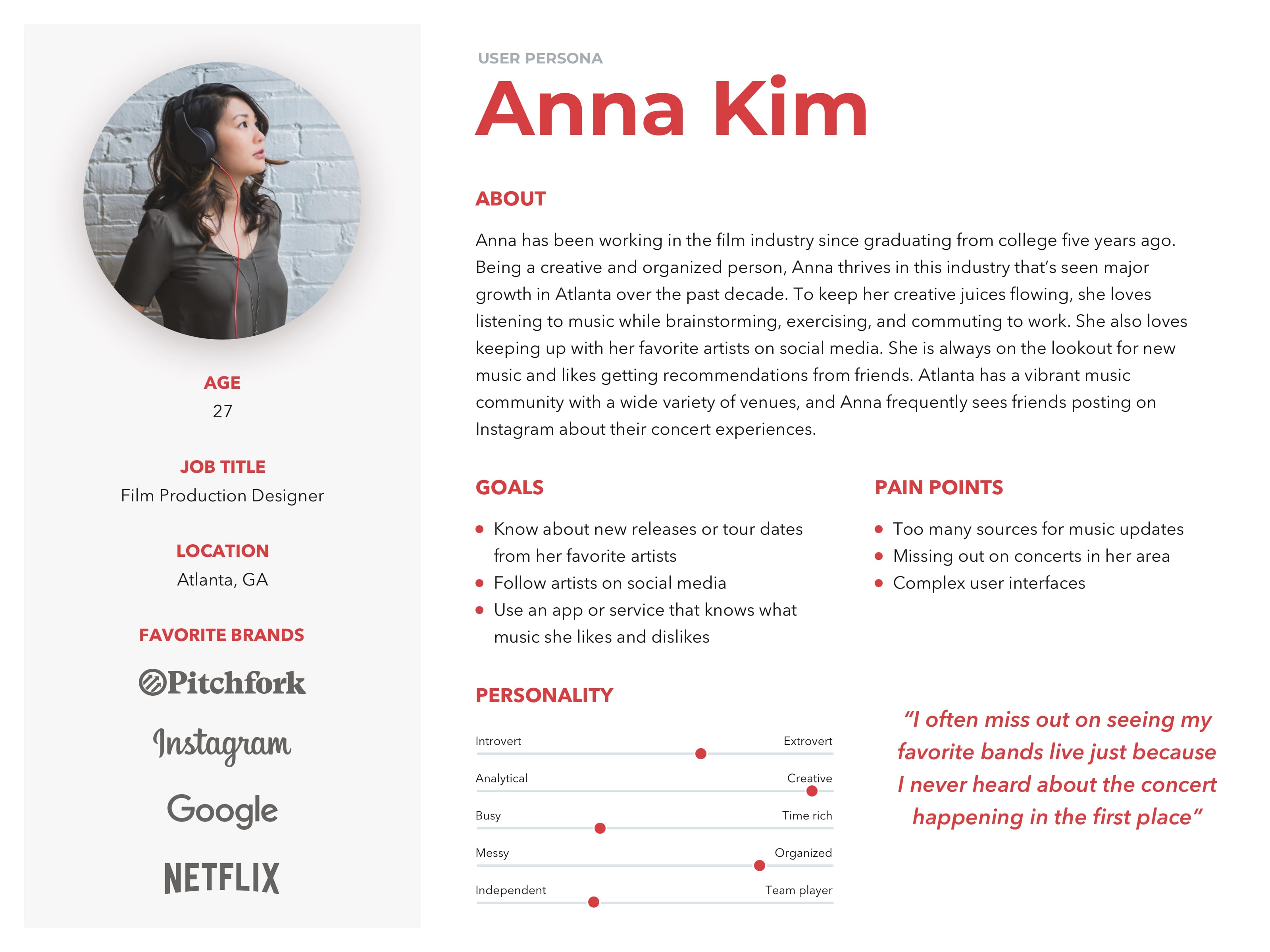 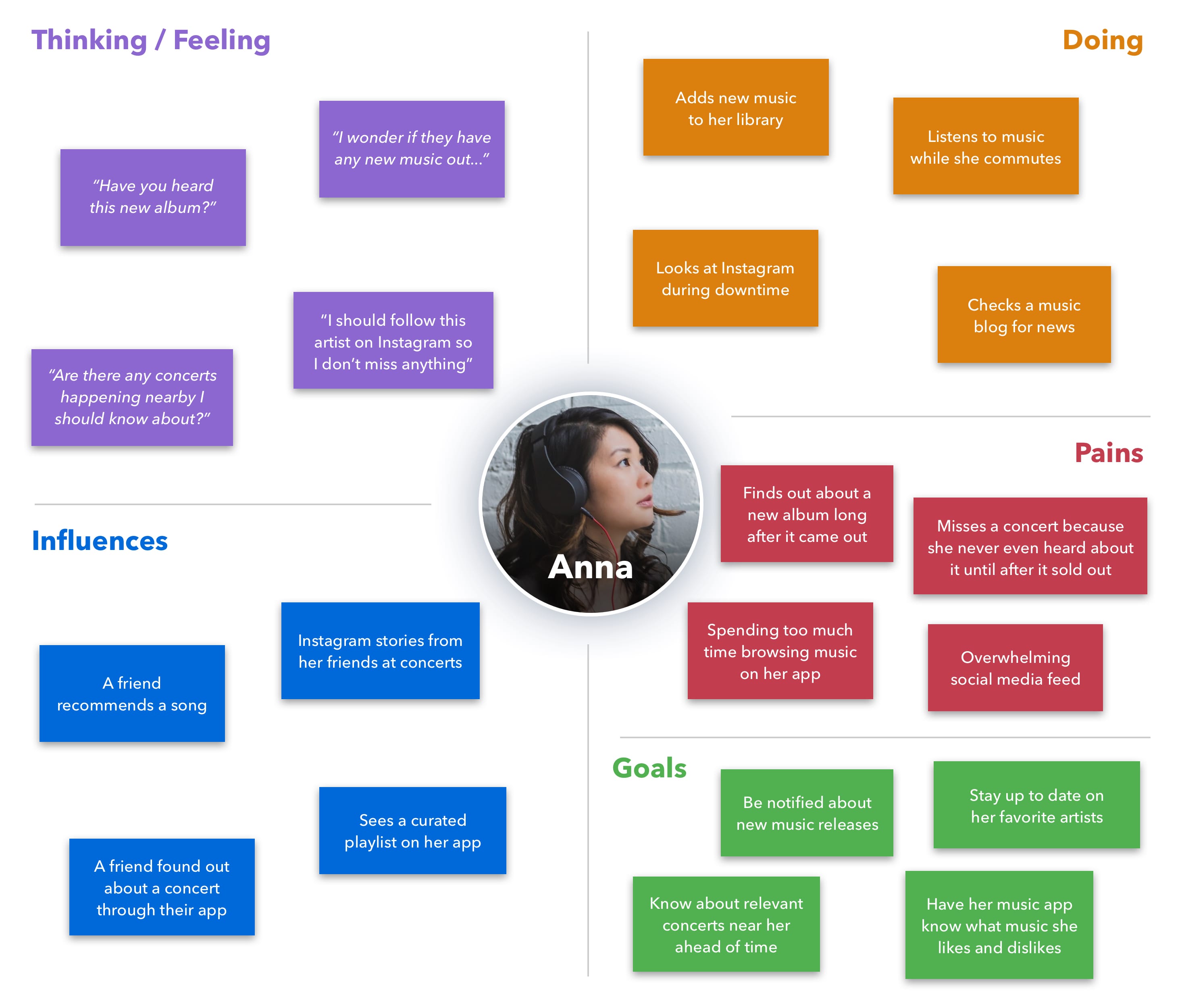 Using the concept of job stories, I further defined this feature by coming up with this simple statement:

“When I like most of an artist’s music, I want to know when they release new music or play a show near me so I don’t miss out.”

The new challenge is to figure out how and where I can place this new feature into the existing product in a way that makes sense and doesn’t break with Apple Music’s existing design patterns. I create a basic sitemap to help me with this (red indicates new screens I would be adding for this feature). 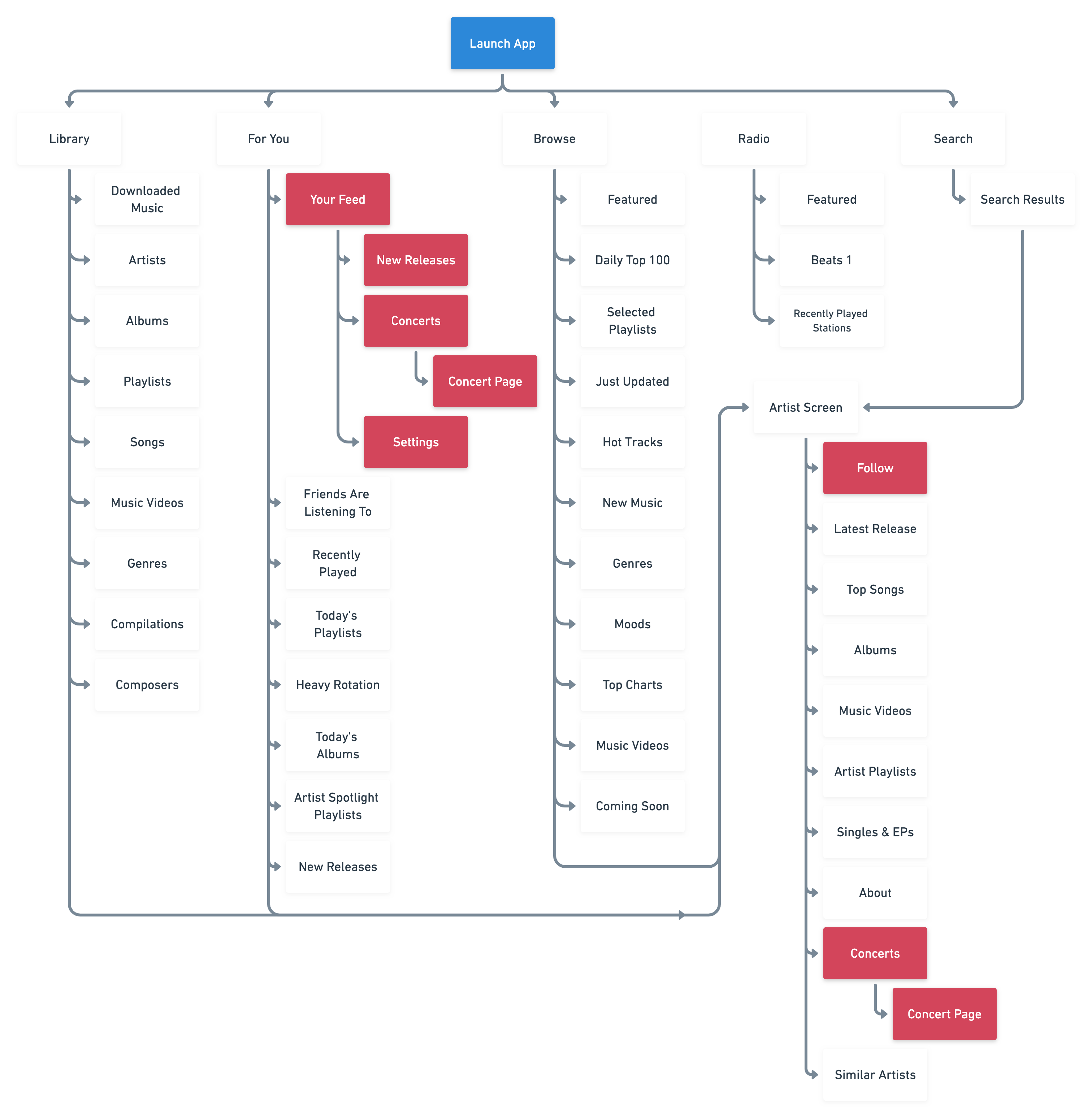 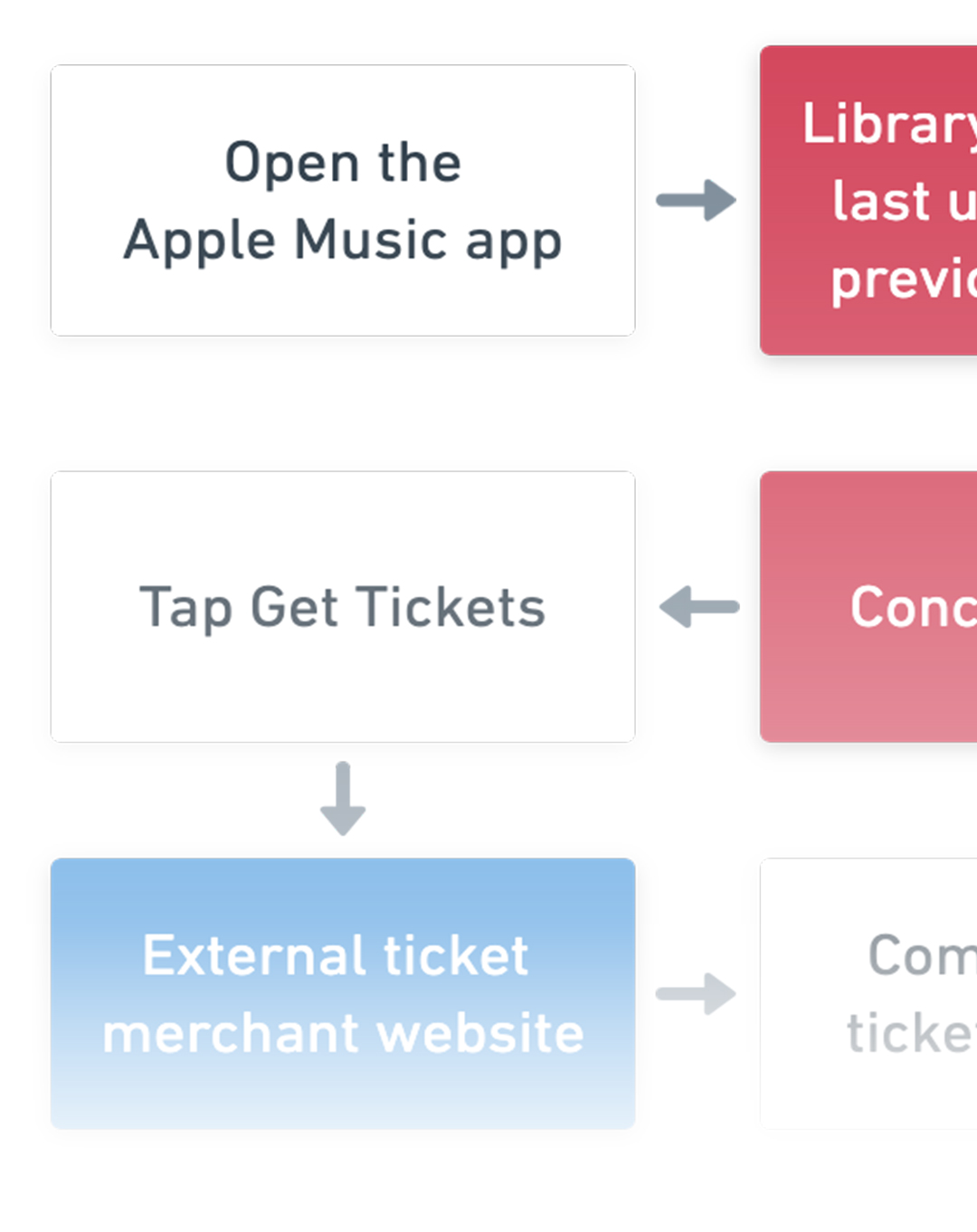 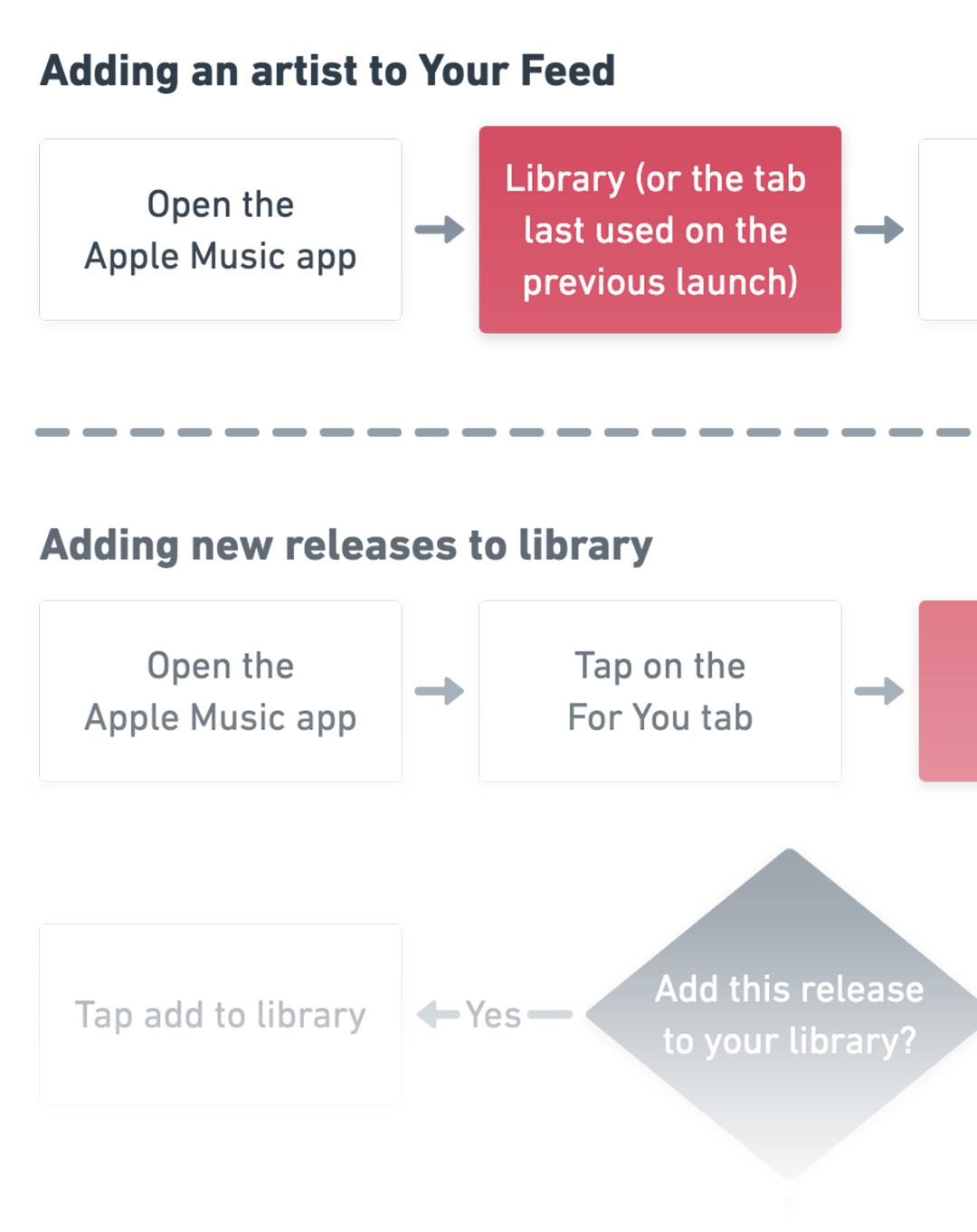 Once I worked out a typical task flow and user flow, I created some low fidelity wireframes of the feed and how it would be interacted with in the app. I decided to place it in the For You tab since that’s where other similar curated features such as playlists are already found.

The challenge here is to use Apple Music’s current design patterns, so the user already knows how to use the new feature without really thinking, since the using the rest of the app has already trained them for it.

To help me with the UI design, I created a basic UI kit for the app containing examples of existing typography, color palette, icons, button styles, and design patterns. Then I created initial high fidelity designs of the new feature, named “Your Music Feed.”

Skip to the Test Phase 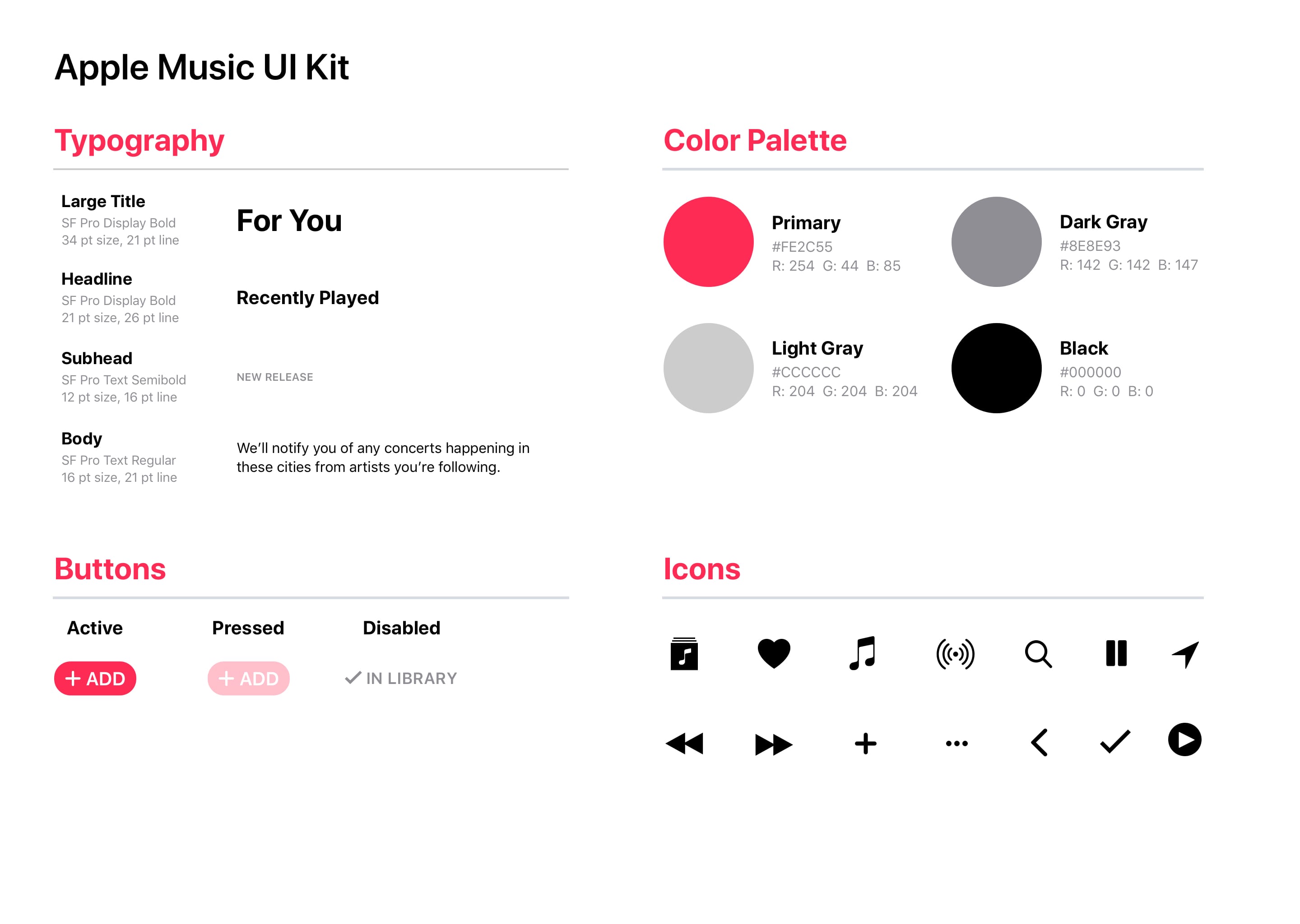 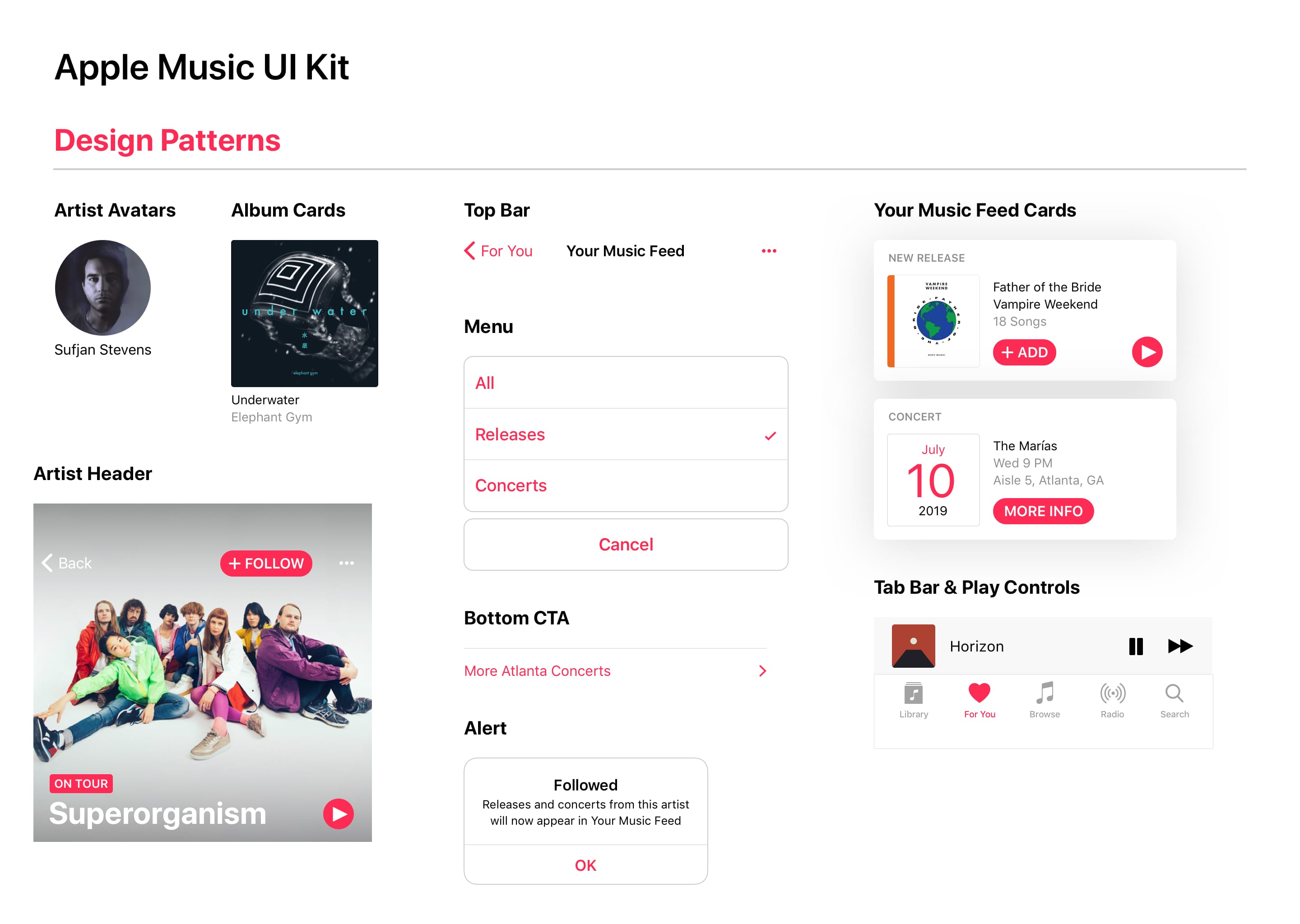 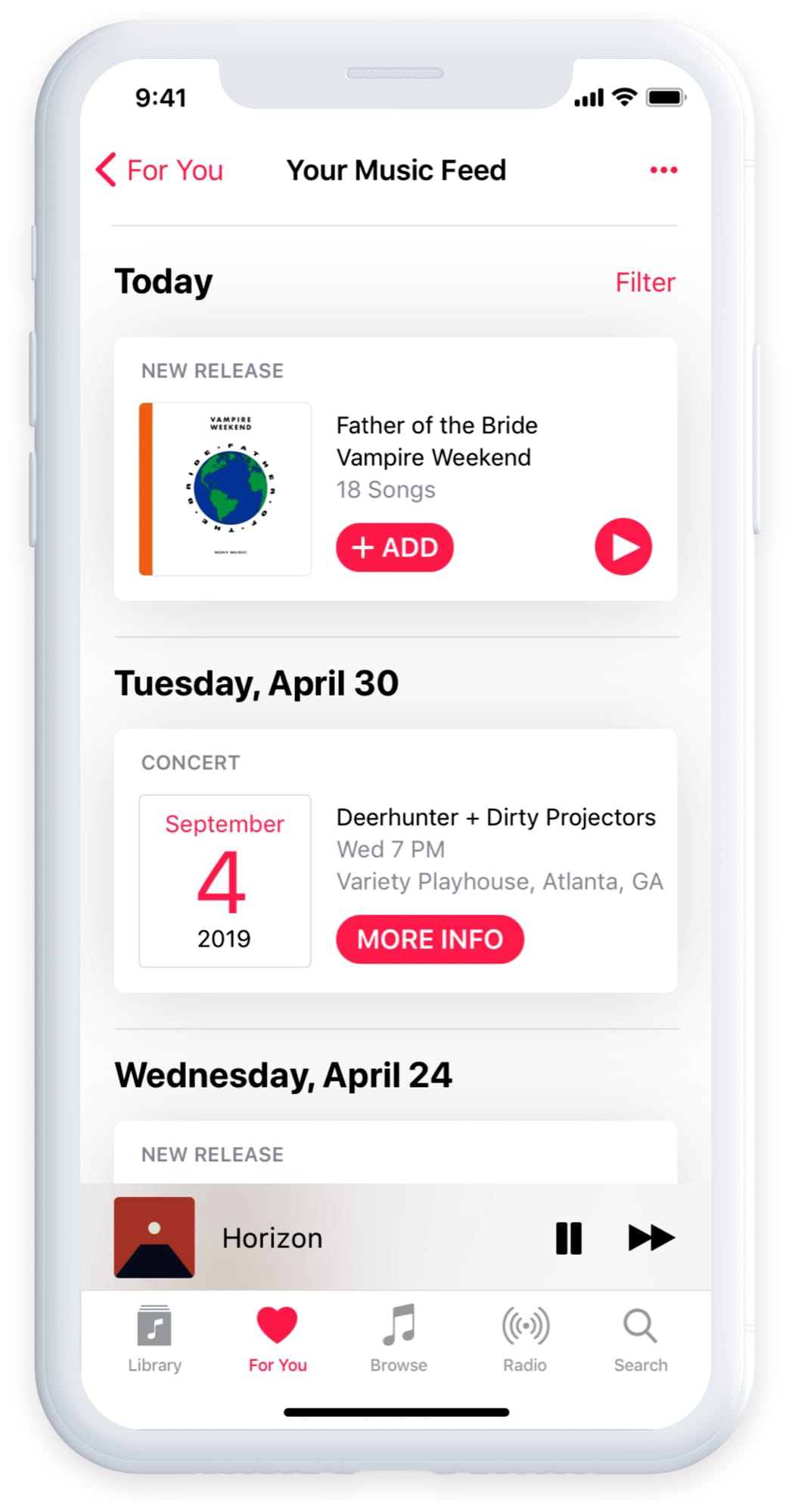 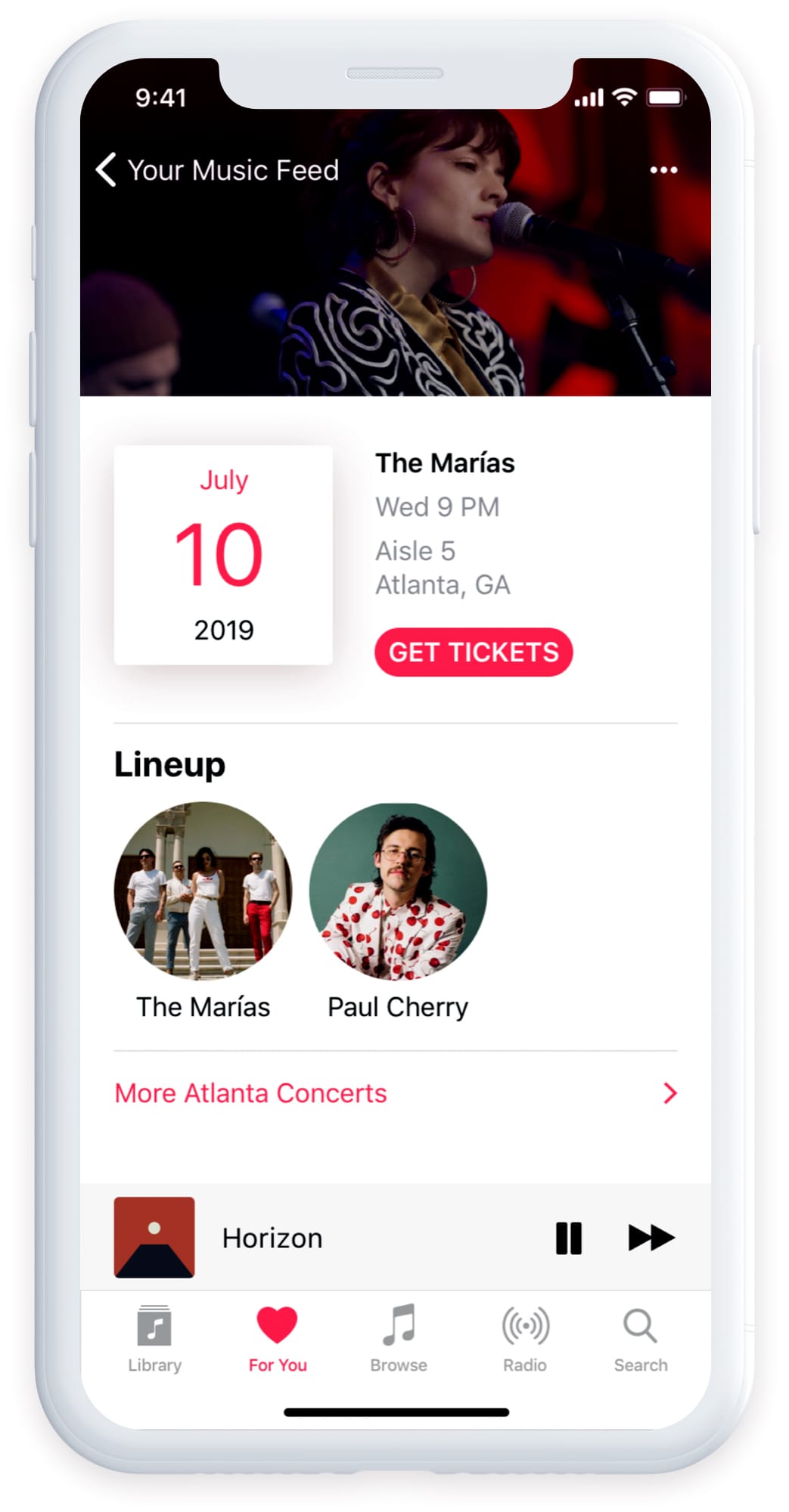 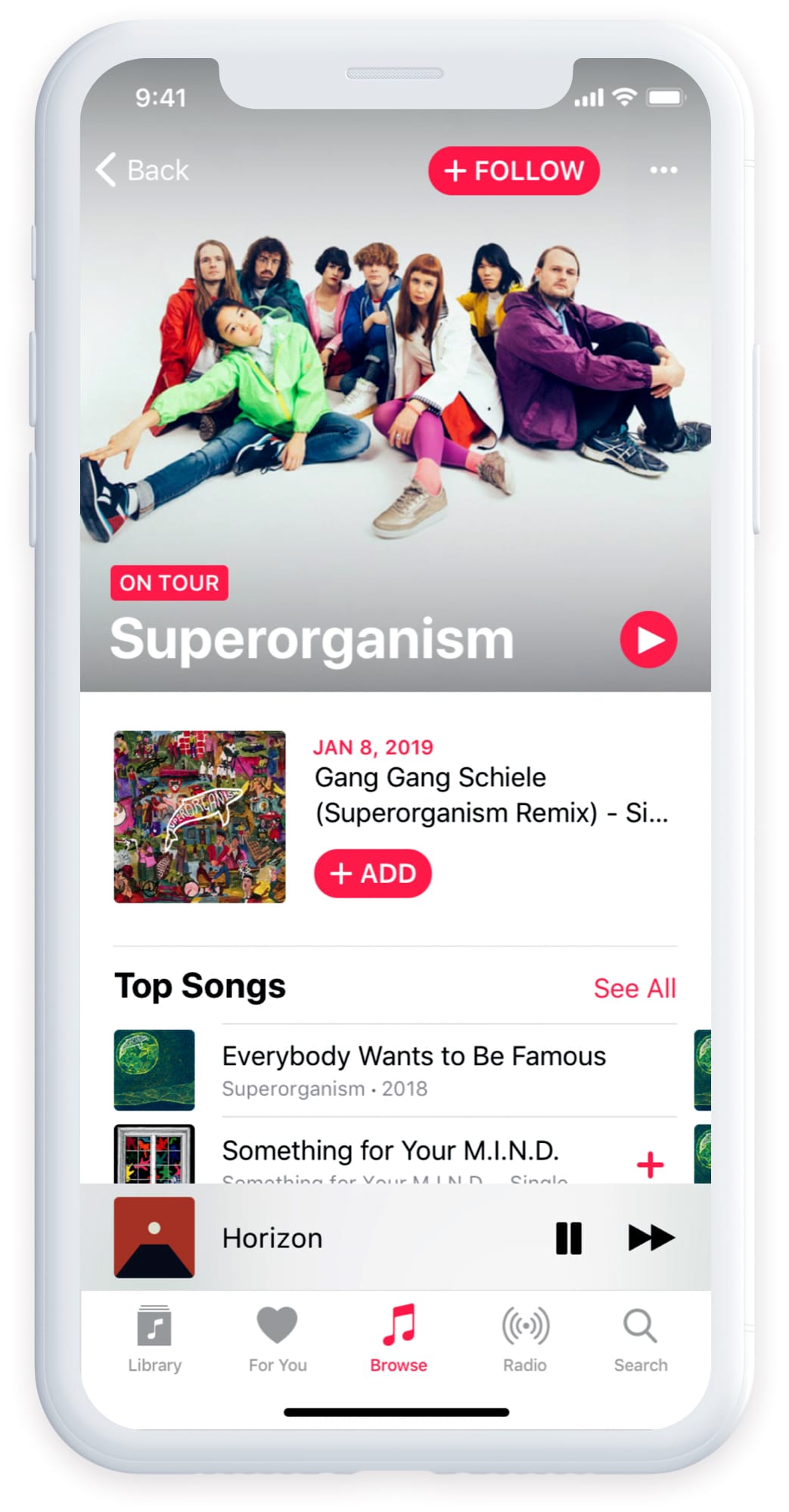 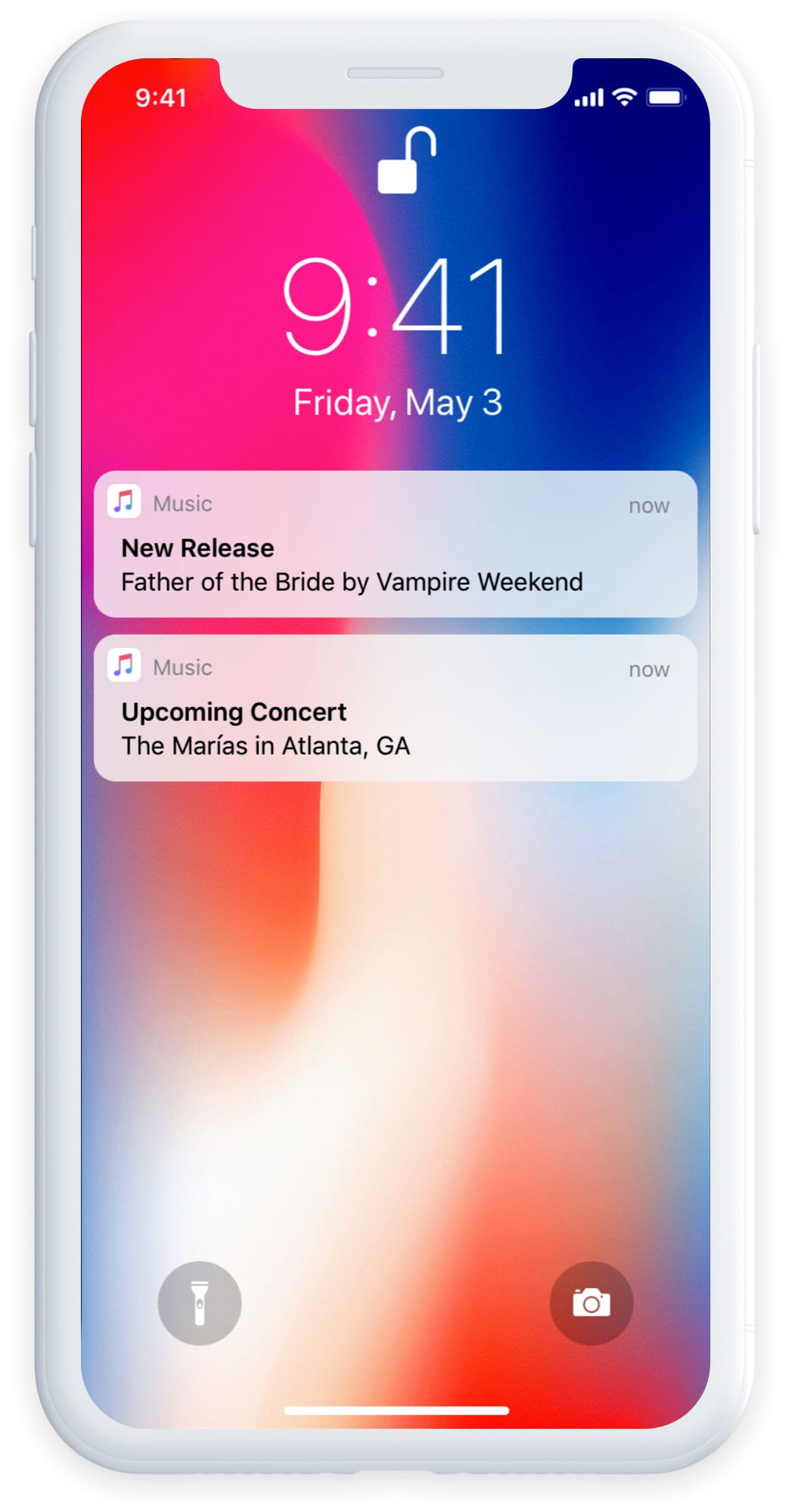 Next, I created a prototype using InVision and conducted user testing to ensure the feature makes sense to users and to see if various tasks related to the feature could be completed.

What I've learned from this project

This project taught me how to work within the constraints of an existing product and design within an existing system, relying on already present design patterns and components. Since users are already familiar with these conventions, breaking with them could hurt usability.

One challenge I overcame during research was learning how to gain insight into what users need without asking them directly (“What feature do you wish this app had?”), since that leads to simply wishful thinking and a lot of “it would be cool if the app did this” responses. Indirectly feeling out for user pain points is a more effective method of learning what problems users need solved and how to best solve them.

Assumptions are fine to take note of but untested assumptions are dangerous and counterproductive to the design process. When I began this project I already assumed people wanted more social and sharing features with music, but it turns out most people don’t really want to share what they’re listening to with all of their friends, but instead directly to specific people. Music is deeply personal and people don’t typically care about combining music and social media. 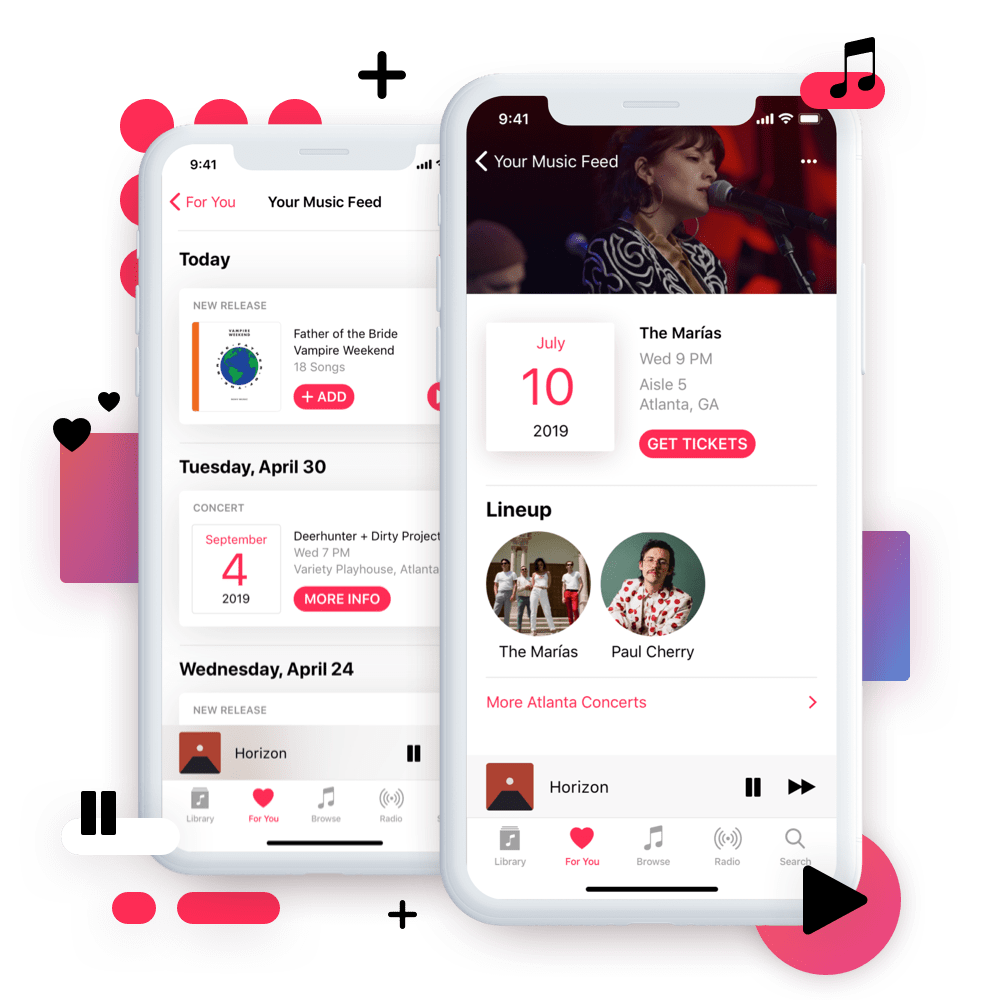 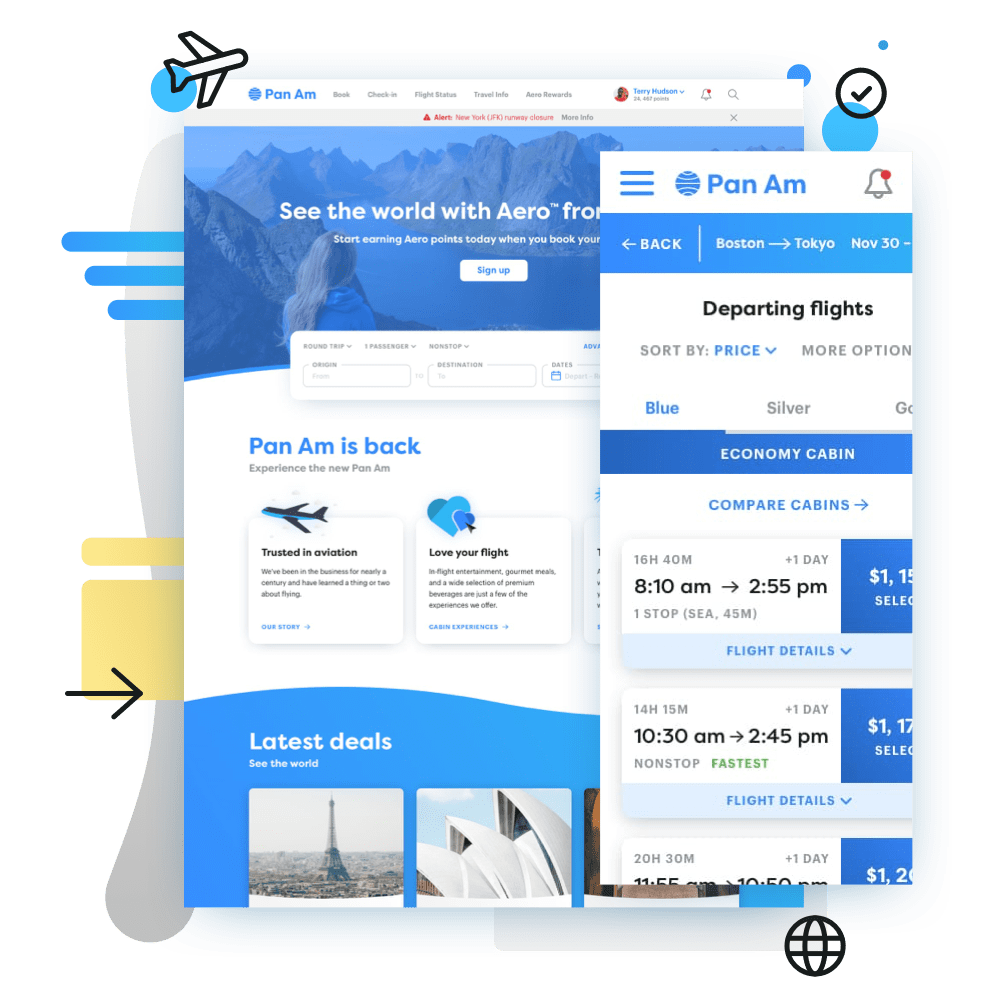 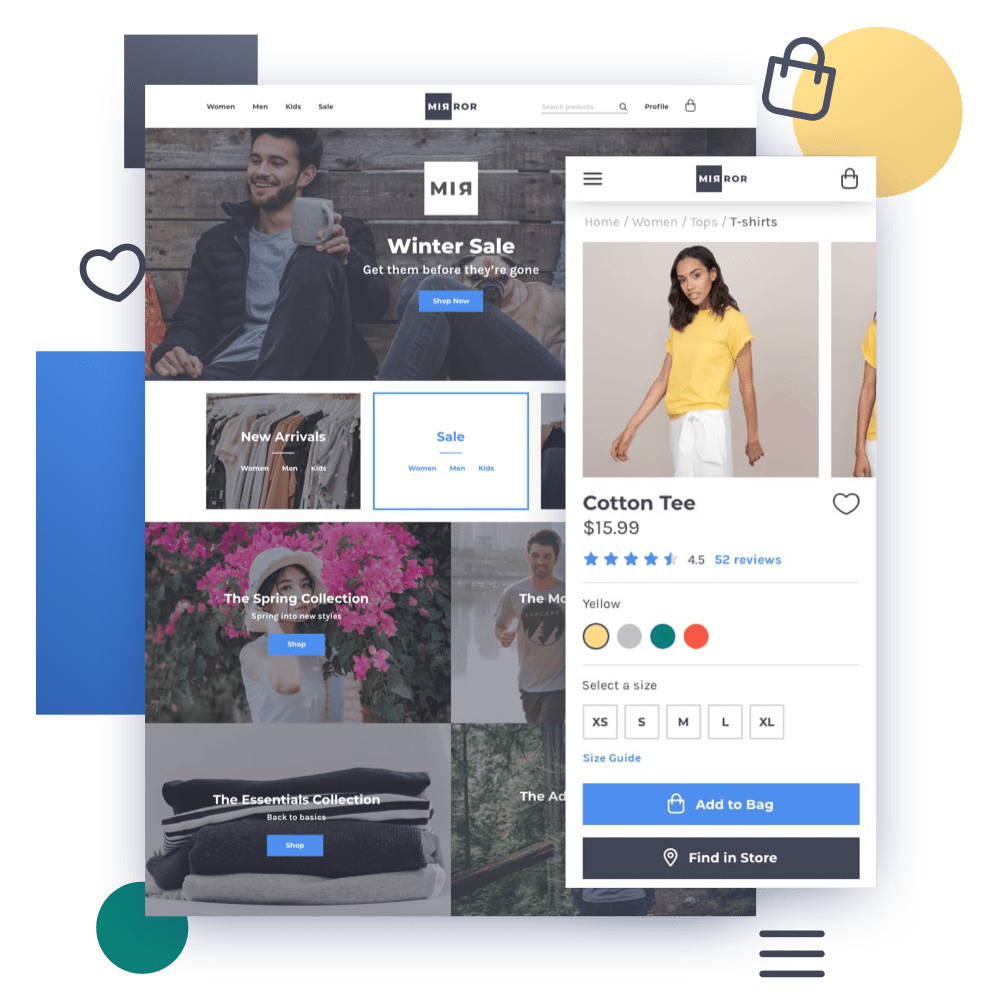